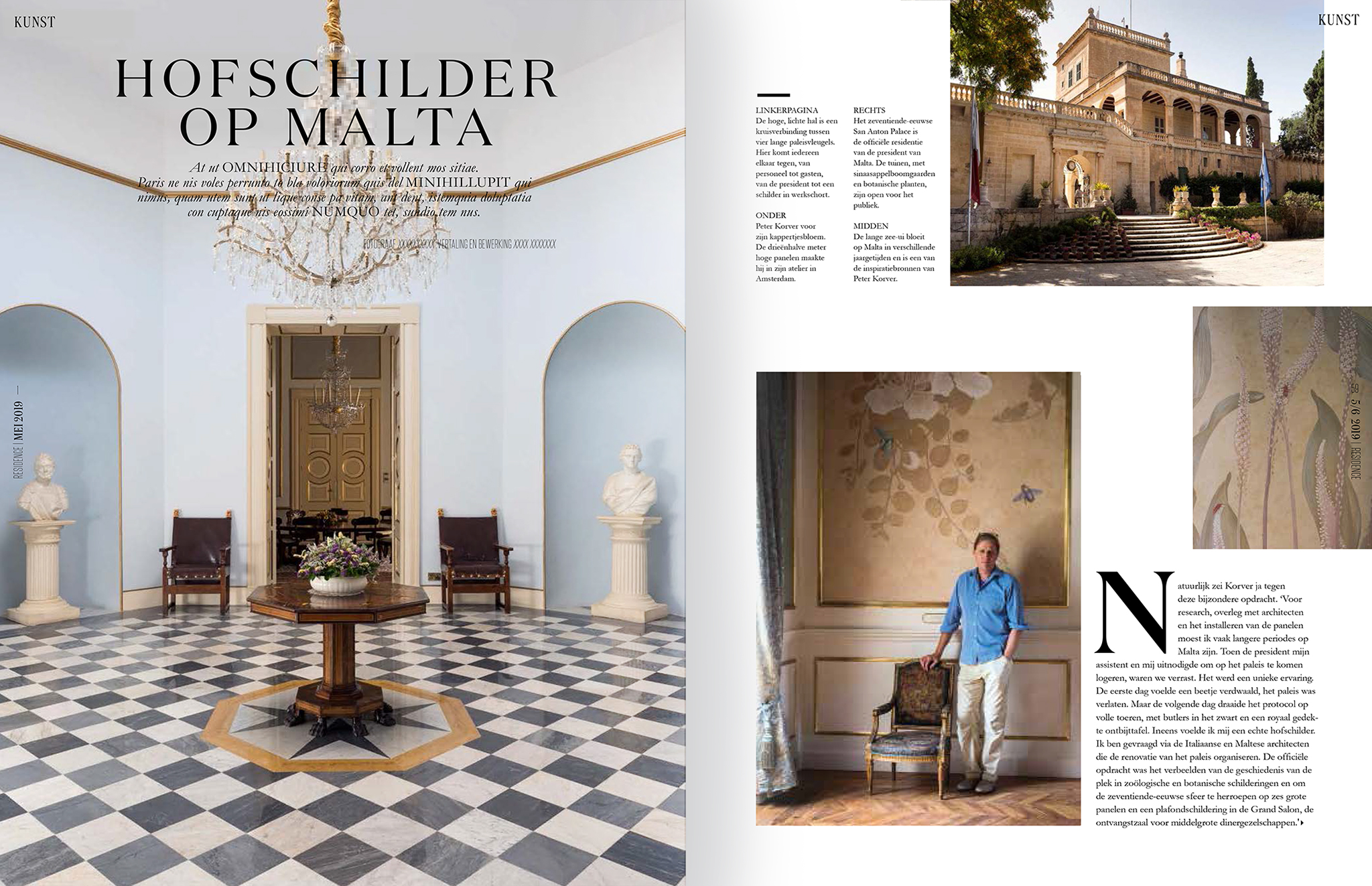 Left; The clarity of daylight in the Rotunda, this high octagonal hall connects four long palace wings. Everyone meets here, from staff to guests, the president and a painter in work apron. Right top; San Anton Palace was built in the early 17th century. Today this is the official residence of the President of Malta. The gardens with orange groves, botanical collections, ponds and decorative flowerbeds, are open to the public. Right center; Though depicted together in this panel, the long flower torches of Sea squill can only be seen in the intense heat of August, its leaves however only during winter and spring. Right bottom; Peter Korver in front of the Caper panel. Six of such three and a half meter panels were done in his Amsterdam studio and from there transported to Malta.
"Of course I said yes." Korver recalls. “For research, meetings with architects and later during the different phases of installation I had to spend several longer periods in Malta. To our pleasant surprise my assistant and me were generously invited by the President to stay at the palace during these periods. A unique experience. The first day it all felt a bit “lost in translation”, as the palace seemed almost deserted that day, The following day however, the protocol was running at full speed with butlers and a generously laid breakfast table, it soon felt a bit like being one of those classical court painters."
Contacted for this project by Lisa Carson of the Italian / Maltese design firm Daaahaus, the architects in charge of the palaces renovation, Korvers official assignment was to design and deliver a set of six room sized zoological and botanical paintings plus a 70 M2 ceiling painting, and so revive the eighteenth-century atmosphere of the restored “Grand Salon”, a room for medium-sized dinner receptions. 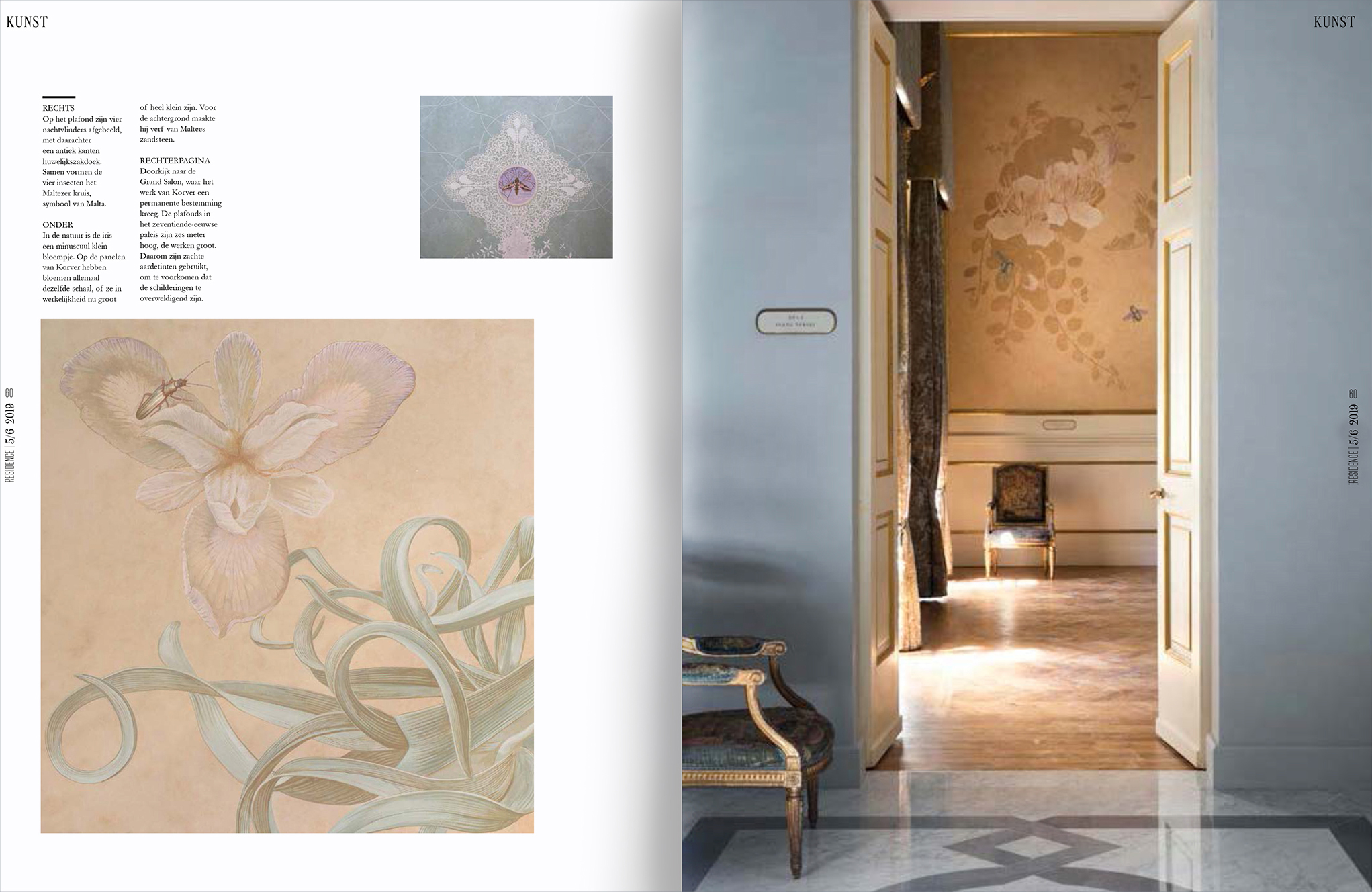 Left top; One of the four moths on the ceiling framed in cartouches of painted antique Maltese lace. Together these four insects mimic a Maltese cross. Left below; This miniscule Iris hardly stands out in nature. Whether large or very small, Korver painted all of his plants and flowers on the same scale. As background colour he made paint out of grinded Maltese limestone. Right; The ‘Caper flower’ panel as seen through the doors of the Grand Salon where Korvers work found its permanent destination. The ceilings in this seventeenth-century palace are upto six meters high, the works large, so soft earth tones have been used to prevent the paintings from being too overwhelming.
CYCLING
For inspiration and research I got on a rented mountain-bike to explore the country. I walked the cliffs and the shores and spoke with local botanists and biologists. In the end I used the plants and animals that I had encountered - chance encounters, not exclusive species. The caper bush for instance, growing along walls and rocky surfaces their magically beautiful flowers only last for one day, unless of course their pickled flower buds ( and fruits ) are eaten by us. Malta’s omnipresent sandstone, ground and made into paint, has been used as background colour in the panels. Taking into account the hight of the room and the size of the panels I chose a soft colour scheme of earth tones, as strongly pronounced colours might have been to overwhelming. Large vegetal shapes with small intricate details; flowerbuds, stamens, birds, insects and other small animals. Set like jewels in a grand shape.

NATURE
I don’t know any better than nature being my language. As a toddler sitting at the front of my mother's bicycle, at least so I'm told, I already noticed and pointed out everything. In my paintings my love for art and nature and my academic background in biology and history coincide, both in visual and narrative form. I always first delve into the story of the building for which I'm working. In the Netherlands too, I mainly work in historic buildings for private and corporate owners. For a current assignment in a late 17th c. Amsterdam canal house, I work with the imagery of some recently discovered ceiling paintings from the same period; the days of the Dutch East India Company when having exotic and native birds painted alike on the boards between your ceiling beams, saw a short career of being highly fashionable. . In Malta it were local flowers and animals that told their stories; endemic lizards, iridescent carpenter bees, turtle doves that have almost been hunted to extinction, but also a Maltese falcon with its legendary status since the rulers of this country owed a local peregrine as annual lease to the Habsburg Emperors. Later this country saw a period under British rule, another influential era in Maltese history. By the way, only recently Queen Elizabeth and Prince Charles were staying as guests here at the palace. Isn't that great, those common local plants and animals now shining down from these walls like monumental state-portraits ?” 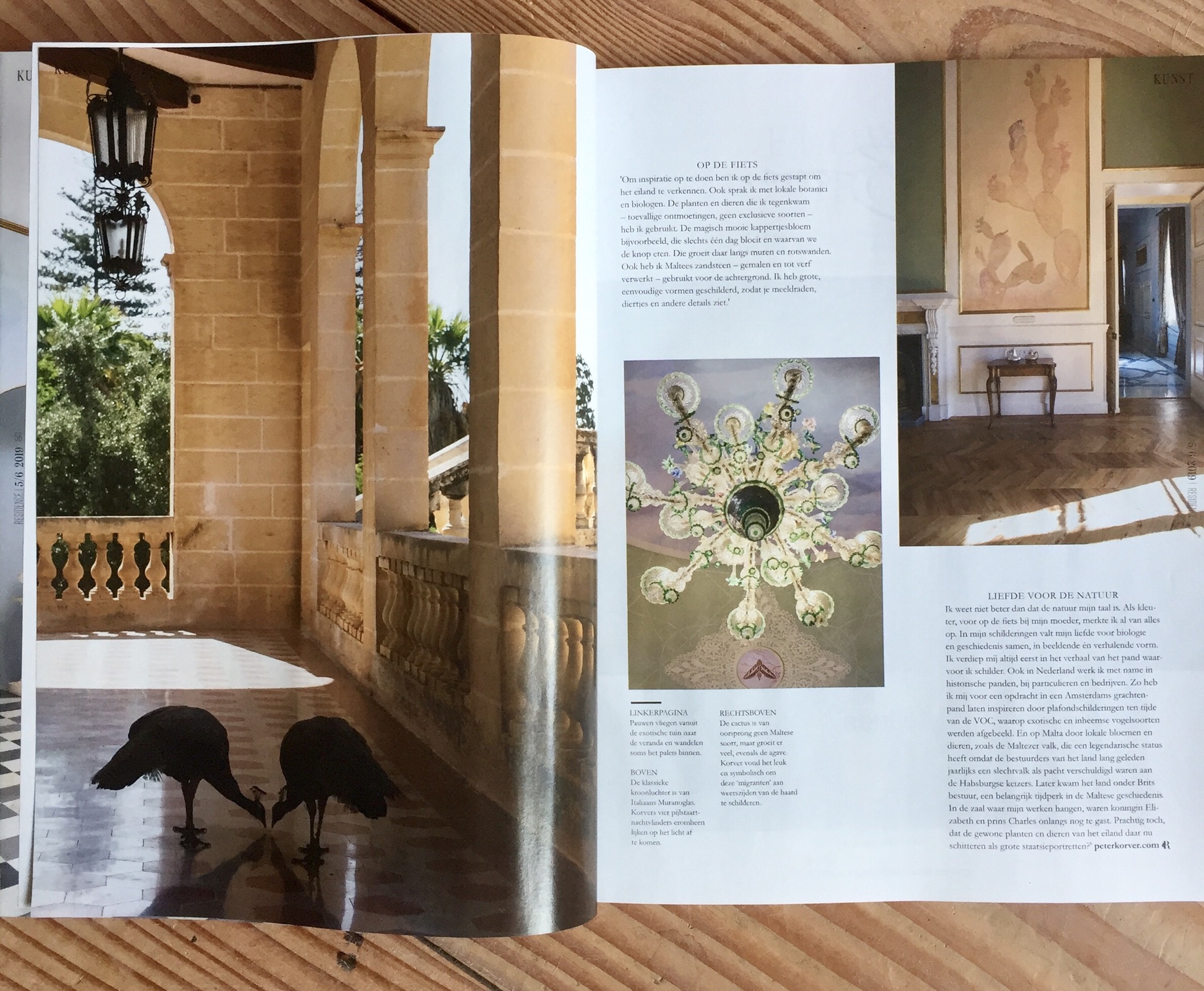 Left; The palace gardens peafowl occasionally fly on to the veranda and belvedere, sometimes making an inquisitive step inside. Right top; Though not originally from Malta, the fig-cactus - just like the agave - has grown into an extremely common sight since it was imported from Mexico centuries ago. Korver thought it to be both fun and symbolically appropriate to paint these two "migrants" on either side of the Salons monumental fireplace. - Right below; The antique Murano chandelier, surrounded by Hawk moths aparently drawn by the light. 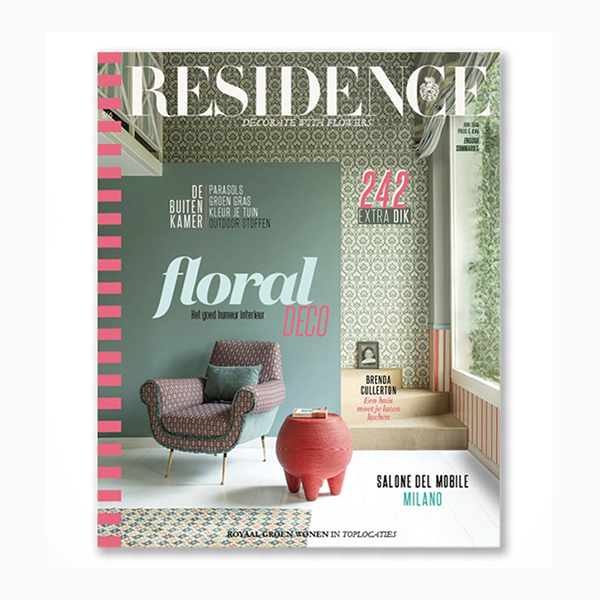